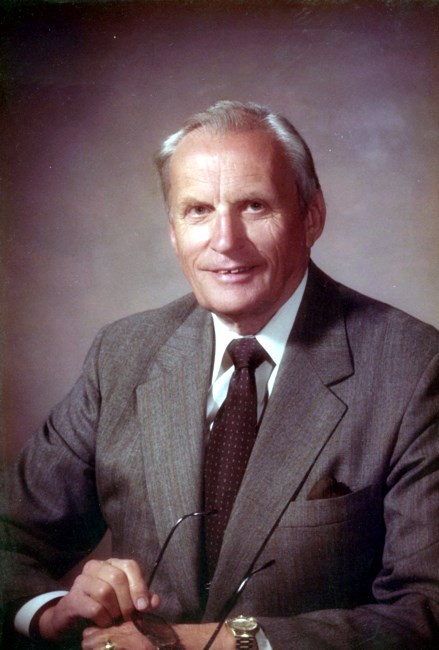 The Surrey Historical Society lost a long time honourary member with the passing of Alan Davidson. Alan died peacefully having reached the age of 99. He was born in Vancouver to Parents William and Lily Davidson.

Alan was of the generation who grew up during the depression, went to war and survived it, and returned to operate a successful business and give back to the community in many forms. Alan grew up in the Tynehead and Port Kells districts of Surrey, went to local elementary schools and graduated from Surrey High School, the only high school in Surrey at that time.

Hugh & McKinnon, a local real estate and insurance office run by Fabian Hugh and Frank McKinnon needed assistance in their office. Frank put in long hours as there was no hours of work act or minimum wage. Each partner drew out $55 a month to live on. In 1936, Frank McKinnon married Doris and it was decided to ease his work load, it was time to add another employee. A call went out to Surrey High School to recommend a student who might fit into the office. The school recommended Alan Davidson. With the Great Depression in full swing, Alan had little hope of going to University and gratefully agreed to an interview. It was arranged that Alan would come in before school to light the fires, go to school in the morning and work the office in the afternoons and Saturday. He did entry level chores such as dusting, sweeping, and learning to type. Alan continued as an employee after he graduated from High School.

Alan joined the call for young men, during the Second World War, and joined the Royal Canadian Air Force as a pilot. He trained locally at the small air field bordering Boundary Bay in Delta. He spent much of his time flying in East Africa where he made many deep and lasting friendships which he maintained throughout his life. After the war, Alan continued as a member of the Air Force Officers Association.

On his return in June of 1945, Fabian Hugh and Frank McKinnon offered Alan a 30% partnership in the firm. Alan was to be in charge of the Insurance Branch, Frank was in charge of the Conveyance and Real Estate Department, while Fabian was in charge of Estates and Dyking Work. Fabian Hugh was appointed Police Magistrate effective November 1, 1946. Because of the limited work load, this was a part time appointment and could be conducted along with the firm's work.

This picture shows Alan Davidson in the late 40s or early 50s. He had returned from duty in the Canadian Air Force and was now a partner in the firm. He had joined the firm as an office clerk. He lived in Tynehead and used to ride a bicycle from Tynehead to Cloverdale and back in the summer time, for a period of two years. In the winter he boarded in Cloverdale.

Alan remained with the company until his retirement at the age of 65. In 1947 Alan married Doris McBeth who passed away just 6 weeks before Alan's death, leaving them to just miss celebrating what would have been the 70th wedding anniversary in September.

Davidson and his partners bought a number of lots on the east side of Cloverdale's main street and sold them to aspiring business people. Businesses like Venus Cleaner, the Clover Inn, the Clova Theatre and new larger premises for the Bank of Montreal and Hugh & McKinnon all helped to make Cloverdale a busy business community.

In the greater community he was the Chairman of the Cancer Control Agency of BC and he remained active until very recently. In the broader insurance industry he served as president of the Insurance Brokers Association of BC.

Alan's partner in life, Doris was born Doris Eileen McBeth on January 12, 1923 in Gull Lake, Saskatchewan and she passed away June 10, 2017, in White Rock. Doris and Alan's children: Lyall (Sandy), Denise, and Jamie (Lori), their grandchildren: Stuart, Craig, Erin and Amy. Alan and Doris lived in east Cloverdale most of their lives and retired to Ocean Park. 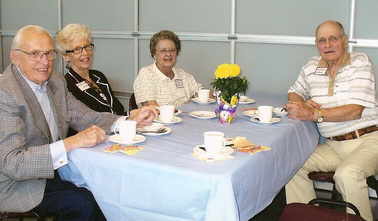 Alan was a honourary member of the Surrey Historical Society. He had an active interest in the preservation of Surrey's heritage having grown up and spent most of his life in this community. He served on the executive as a Director from 1995–2000 and he served two terms as President of the Society from 2000–2002. He attended meetings regularly, and was a willing participant in interviews and sharing his knowledge and background of Surrey's History. He made significant contributions to the web page in Surrey History on Hugh & McKinnon. (See Hugh & McKinnon)

Alan Davidson joined Fabian Hugh's office in 1936 and remained with the company until 1983. He began as an office boy, and upon his return from Canadian Air Force duty in June of 1945 he became a 30% partner. When the company became Hugh & McKinnon Limited he was a 1/3 partner. He was responsible for the insurance department as well as being a director of the Company. This picture of Alan was taken at his retirement as a Director and the 1986 Chairman of the Cancer Control Agency. 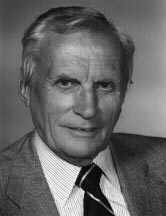